A muscled man descends from the ceiling with a D shaped device. The straight part is a metal bar and the curved portion is a chain. Towards the end of the performance, he raises up about 40 ft holding onto the bar and tilting his head back over the chain. He then removes his hands and holds himself up only by his head. This is insane! He then repositions himself upside down and suspends himself with just one foot. Holy cow! 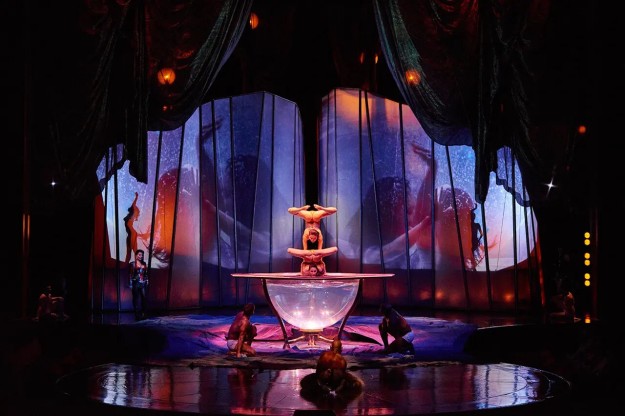 Later on, a giant glass bowl rises from beneath the stage filled with water and two women. They proceed to display impressive balancing feats combined with great contortions.

Those are the three highlights of the show. Zumanity is 18+ due to some of the performers appearing topless. As with all cirque shows, the space is quite small and there is no bad seat.

Get tickets for Zumanity now.

Rating Scale: Exceptional Value > Worth It > Half Price > Go for Free > Don’t Bother